If you travel a lot, you know things can go wrong. All travel bloggers know this. Did I expect things to go THIS wrong when on a cheerleading holiday in Benidorm? Absolutely not. Anyway, here’s what happened.

I was on a cheerleading tour with my cheer team from University. It was our very first night, and despite how tired I was, I agreed to go clubbing with a few of the girls so I didn’t get major FOMO (Fear of Missing Out). The club was a 45 minute walk from our hotel, so we decided to get a few taxis. Upon arriving at the strip, it was clear we had entered a whole new world.

If you’ve never heard about Benidorm, or seen the famous TV programme Benidorm, then there are a few things you need to know: 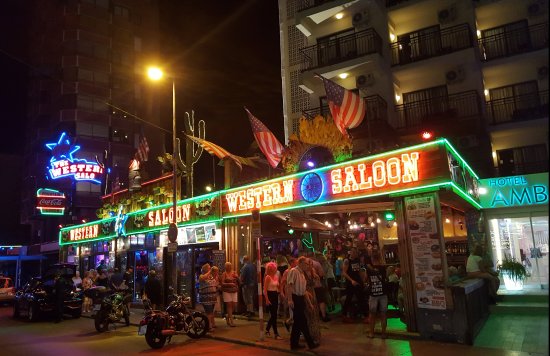 This photo of Western Saloon is courtesy of TripAdvisor

One of the first things I witnessed was a woman being carried on a stretcher after she had vomited all over herself and defecated herself. Lovely. Within minutes of being there, one of the cheer girls had managed to get covered in someone else’s vomit. Honestly, it was not for the faint hearted.

In Benidorm, clubs offer free alcohol to entice you to enter. If you play your cards right and go from one club to another, you will never have to pay for a drink. This is basically a guarantee, particularly if you’re a woman. It is safe to say, that it didn’t take long for our little group to become utterly smashed – that’s very drunk for anyone unfamiliar with British slang.

Some of the girls had begun to disappear home in taxis. Now, I like to consider myself as the ‘Mum’ of the group, and I wasn’t leaving until everyone was home safe. This would later become a huge error on my part, but I can’t help but sacrifice my own needs for others. A true martyr I know – yes this is sarcasm, I don’t love myself that much.

Anyway, by this point everyone had wandered down to the beach. All the girls are drunk as skunks, one is topless, at least 2 have found guys. It was hilarious yet nightmarish. A group of girls get into a taxi and I insist on staying to be with the last 2 girls, the girls that have found guys.

Its 5am, which apparently was the perfect time for skinny dipping… 5am is also a particularly busy time near the beach, for some reason or another, and my panic mode kicks in. I linger by the sunbeds, watching everyone’s things, making sure no valuables go missing. The girls and guys are all splashing about in the sea whilst I sit panicked in the sand.

Fast forward, and one of the girls is still in the sea, by herself, and very drunk. I was also, very drunk. Her head disappeared under the waves for probably a few seconds, and in a state of panic I ran fully-clothed into the sea to rescue her. She was perfectly fine as she’s a strong swimmer, thank god.

I am now stood in the sand, soaking wet and inebriated. At this point, everything is happening so fast. One of the guys tries to pay me €10 to let them take the girls back to their apartment. I refused and try to wave down a taxi to get us all back safe and sound. I didn’t trust these random strangers, and one of the girls had a boyfriend and I didn’t want her to do anything she would regret. The girls insisted on going off, and there was a lot of drunken miscommunication. I was still insistent we went back to the hotel, and kept trying to find a taxi.

Before I knew it, the girls and guys had completely disappeared, leaving me stranded on the beach.

What makes being stranded, whilst inebriated and soaking wet, so much worse? Having NO idea where you are staying. That’s right. I didn’t know the name of my hotel, or where it was. Picture this, it’s probably 6am, and there is a sopping wet, drunk girl, shoeless and hysterically crying as she wanders down the streets of Benidorm. Yep, it’s me.

My logic for getting to the hotel, which I had no idea where it was or its name, was to stay by the beach. Our hotel was one or two roads away from the beach, so if I stayed by the coast, I’d find it right? WRONG. Unfortunately for me, the coast stopped and there was a miniature cliff. The road stopped and so did I. I found myself sat on the pavement, crying my eyes out for a good 30 minutes. A few passers-by stopped, some also lost and drunk. A few offered help. All I could tell them was “I can’t help myself, I don’t know where I’m staying.” Tragic I know.

My phone cost a fortune to work abroad and was on 1% battery. I’d spent a good hour trying to get some connection or data to find where I was. I managed to contact one of the girls on Facebook and get the hotel address and used the last of my battery to google map the hotel. It was about 15 minutes away.

I also used the time to take a picture and send it to some friends. I now think it’s hilarious but it’s actually tragic. Here it is for your enjoyment:

So I’ve started on my 15 minute walk back to the hotel, I get to the road the hotel is on and my phone dies. Great. But at least that 1% lasted a while. It’s nearly 7am, there is no one around at all. The streets are barren except for the occasional delivery man. I’d seen a few deliverymen already that morning, all had ignored me and kept to their own business. But not this one.

I’m shuffling down the street, still sobbing, when the deliveryman walks back from putting down a parcel and tries to force himself on me. He presses his lips against mine and I freeze for a moment before trying to shove him away. In shock, I start swearing violently at him. He continues trying to wrap his arms around me, and tries to pull me into the back of the van with the rest of the parcels.

I like to consider myself as a feisty girl, and thank god I am, as my aggressive instincts kicked in. I’m kicking him, screaming and swearing, punching. I was doing my worst. No one comes to my rescue, no one hears me scream. The man eventually backs off and jumps back into his van and drives off. I’m safe.

At this point, I’m crying harder. I’m still wet and drunk, and now shaken beyond belief. My phone doesn’t work, I’m alone and I don’t know where to go as my hotel is on this very road. I keep going towards the hotel, in the same direction as the deliveryman drove, as it’s the only way I can get to safety. I walk for no longer than a minute before I’m shocked again.

The deliveryman had driven down the road ahead, stopped and jumped back out again, getting me further away from the van and seriously shocking me. He tries to pull me into the back again, by this point we are directly outside my hotel. I’m still kicking and screaming, and I’ve managed to kick the back doors of the van shut so he can’t get me in them.  He’s now dragged me into the road and onto the left side of the car, the driver’s side. I’m banging on the side of the van as hard as I can, trying to damage it and make as much noise as possible. He’s jumped into the driver’s seat, and is still pulling my arm, trying to force himself on me. I begin trying to smash the wing mirror, he starts going from trying to kiss me to spitting on my face. I’m still screaming.

He suddenly lets go, slams the door and drives off, leaving me in the road. Someone from the hotel has seen us. The hotel receptionist had jumped in his car to follow the van. He asked me briefly what happened, I could hardly speak. Next thing I know, he’s driving off after the van.

Shaking, I try to get back to my room. I’m crying so hard and shivering so violently, I can’t open the door with the key. One of the girls from another room hears my sobs, and comes outside, finding me collapsed on the floor. She quickly grabs me and wraps me in a towel.

There was a lot of explaining, and people help sort me out and put me to bed. It could have been a lot worse, as other girls on the trip aren’t as feisty as I am, and it could have had a very different ending.

The receptionist eventually lost the driver, and he got away with it.

I spoke to the girls from the beach, they apologised and we agreed it was a huge miscommunication. We moved on from the attempted kidnap and enjoyed the rest of our trip.

Moral of the story: help others, but don’t forget about yourself!

And that my friends, is how I escaped an attempted Kidnap in Spain. I hope you enjoyed reading about my ordeal, I’ll be sure to keep you updated with other travel tragedies and misadventures!

The 5 Best Apps to Use in China

Why you MUST visit Villefranche-sur-Mer instead of Nice

The Complete Guide to Visiting the Picturesque Plitvice...

Top 5 Things to do in Girona

How to Survive a Festival Abroad

I’m so glad you’re OK! Sounds like a terrifying experience.

Thank you! It was awful, but thankful it didn’t happen to any of the other girls!

Wow, you’re so lucky!! I hope it hasn’t affected you too badly! I had a similar experience in Portugal, a guy jumped in my cab while I was trying to get back to my hotel (after my mates abandoned me) and tried to change where it was heading. I ended up having to jump out as it was crawling down the busy strip and finding my way back by foot. Loving your blog <3

Ah that’s awful! Some people can be so horrible, I’m surprised the driver didn’t help. I’m glad you’re okay!
Thanks so much, I appreciate it! 🙂

OMG my heart was beating sooo fast reading this! Must of been super scary, so glad you got away. Reminds me of my foolish years as a teen on the costa del sol where I got myself into a few drunken and dangerous situations :-/

Thanks! Drinking can be super fun, but definitely can get us into some crazy and dangerous situations!

Hi all, my name is Hannah and welcome to my travel blog WanderWorld. Here you can learn all about my mad adventures, from my travel tragedies to my wonderful wanderings!

Hi all, my name is Hannah and welcome to my travel blog WanderWorld. Here you can learn all about my mad adventures.